Whats the most challenging technical problem currently being worked on here in Bangalore? That latest machine learning algorithm that engineers are attempting to crack? Is it the guidance system for that new age rocket being designed up at IISC? Alternatively, I would posit to say that the most tantalizingly difficult problem to crack today is how to decongest Bangalore.

And yes, this is in fact an extraordinarily complex technical problem to solve. Just to understand the sheer magnitude of the problem, its important to turn the clocks back just 20 years ago to 1995. While the Web 1.0 area was in full swing in the Bay Area, Bangalore was still a relatively sleepy IT services town that hadnt yet quite earned the moniker of Silicon Valley of India. The town truly lived up to its name as the Garden City with more trees than any other Indian city on a per sq ft basis.

With only 4M inhabitants, the citys geographical spread comfortably was able to accommodate all of these residents. Roads, while not overly wide, were relatively congestion free. Many of the flyovers and highways that were now so familiar with were yet to come up. While the road infrastructure was relatively modest, it didnt matter much as the entire city had less than 750,000 passenger vehicles on the road (2 wheelers and cars combined).

Layer in rickshaws, buses, and trucks and you had around another 800,000 vehicles (although of course the trucks were very transient in nature and werent always plying in Bangalore). So overall, one could conservatively say that Bangalore was at a ratio of 2.5 people: 1 vehicle. Now lets hop into our delorian and gun it to 2015, shall we? By some accounts, the city has a population of nearly 12 million people. 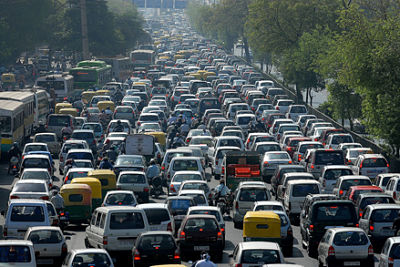 The Transport Department themselves has claimed that Bangalore is crossing 5.5 million vehicles and this isnt even including trucks. Keep in mind that this is just the official data! We all know that plenty of vehicles manage to ply the roads in an illicit fashion. Just simply growing the number of trucks in a linear fashion from 1995 tells you that we could be seeing another 2-3 million trucks!!

This is truly astonishing when you think that the road infrastructure in Bangalore has certainly not matured 5x in 20 years. At best, you have probably seen 2-3x improvement in terms of highways, flyovers, etc. In fact, many areas have seen road degradation as constant usage has led to potholes (ahem, craters) worthy of a spot on the moon. To combat this road problem, the government embarked on an admirably ambitious plan to construct a comprehensive metro system that could shuttle millions of riders daily across the city.

Unfortunately, this system has been plagued by delays and even the completion of phase 1 is now 7-8 years behind schedule. The most critical commercial parts of the city (Marathalli, Sarjapur, Whitefield, Koramangala, HSR Layout) will remain unconnected by metro well into the next decade! How could the government allow this to happen? Well, the answer alludes me, too.

Calling all city planners since this inexplicable infrastructure problem shows no signs of getting solved in the near to medium term. As such, its even more critical than ever that dynamic entrepreneurs step up and offer solutions to the various pain points that city residents face daily as it relates to transportation. Rome wasnt built in a day and neither will the revamped Bangalore infrastructure network.

The best we can hope for is that the private sector creates a shining beacon of light that the public sector can quickly follow.