Since the 17th century, Hyderabad is known to be a famous city,  for its beauty, extravaganza, and regal history. While this metropolis has a lot of tourist spots within the city, for those who want to have a happy weekend getaway from Hyderabad, there are a lot of destinations they could visit which are perfect weekend destinations. Here’s our pick of some of the best 2-3 day trips from Hyderabad you can take!

Located in the Kurnool district of Andhra Pradesh, Srisailam has a prominent place in the Hindu religion. Around 220 Km away from Hyderabad, this town is  a major pilgrimage centre and has many other tourist attractions, for example the Ista Srisailam-Nagarjuna Sagar Tiger Reserve which is the only tiger reserve in Andhra Pradesh.

Situated on the banks of the River Tungabhadra, the city of Kurnool was the former capital of Andhra Pradesh.  And is a close by getaway for people of this city, at a distance of just 213 Km away from Hyderabad. Kurnool has a couple of tourist attractions spots like the Belum Caves and The Rollapadu Bird Sanctuary which attracts a lot of tourists every year.

Gulbarga aka Kalburgi has a lot of shrines and domes built in the Islamic style as it was part of the Hyderabadi Nizam’s dynasty. The ruins of the old Gulbarga is a famous tourist attraction along with Jama Masjid which was built in the 14th century and is situated in the premises of the old fort. Located at a distance of 231 Km from Hyderabad the best time to visit Gulbarga is between the months of October and March.

The village of Hampi is an UNESCO world heritage site. There are many temples including the famous and ancient Virupaksha Temple in Hampi along with many other temples built in the Vijayanagara style of architecture which are all now monuments of the bygone era. Hampi is around 377 Km away from Hyderabad with Hospet being the nearest major town.

Two of the most well known place for having picnics due to its location which homes a couple of waterfalls. The waterfalls and the forest around it makes the place look stunning especially after the monsoon season which makes it an excellent destination to visit with friends and family. Located at 430 and 450 Km respectively from Hyderabad these two destinations have many waterfalls situated near them like the Jalatarangini, Amrutdhara and Swarnadhara waterfalls.

So now that you know where to go to, let’s get Zooming! 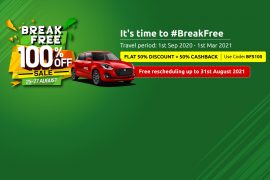